Gaining A Las Vegas, Nevada Annulment Due To Fraud 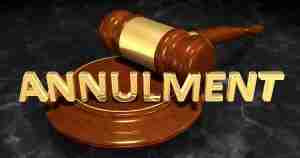 This is the next post in my series on the topic of gaining an annulment in Las Vegas, Nevada. My last article discussed some of the differences between annulments and divorces. It is important to understand that the former makes it as if the marriage never happened, while the latter simply ends the marriage. Divorces, however, are much more common as annulments can only be granted under very specific circumstances. It is strongly suggested that you speak to an attorney in order to understand which process you may be eligible for. In this article I will discuss the possibility of gaining an annulment due to fraud. If you or a loved one are in need of assistance then contact my office today to speak with a lawyer.

One of the limited grounds upon which Nevada will grant an annulment is fraud. It is important to understand, however, that the Court’s definition of “fraud” in this context is very narrow. The Clark County Family Court will only grant an annulment, on the basis of misrepresentation, if the aggrieved spouse would have not entered into the marriage but for the misrepresentation. In other words, the person seeking the annulment must show that they would not have gotten married otherwise. It is, therefore, not enough to simply show that one’s spouse “lied” about something before the marriage.

The foregoing concept is best explained through two examples. First, suppose Jane and Joe are dating and Joe holds himself out as being a US citizen. After the parties wed, Joe informs Jane that he, in fact, only has a temporary visa and now he wants Jane to help him gain permanent residential status on the basis of their marriage. Under these facts, Jane would have a strong argument that Joe entered into the marriage on fraudulent grounds and that an annulment should be granted. Second, suppose Jan and Jack are married and that Jack has told Jan that he likes to drink “on occasion.” Jan later finds out that Jack has had multiple DUI arrests and that he often drinks to excess.  Given that Jan knew that Jack drank, and was willing to go through with the marriage, the fact that he drinks more than she knew likely would not be grounds for annulment.

Whether or not one is eligible to have their marriage annulled will always depend on the specific facts of the case. It is best to discuss your situation with a Las Vegas annulment lawyer to gain a better understanding of your situation and to fully analyze your options. I devote my practice to the handling of family law cases and my office prides itself on providing a high level of service. Contact us today to speak with an attorney.