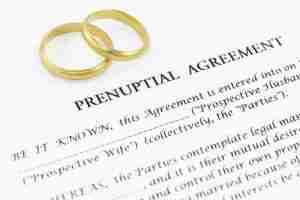 There are a number of issues that arise in regards to prenuptial agreements. While many think that these agreements are an “open and shut case” during Nevada divorces, the truth is that issues often arise regarding the validity and terms of pre-marital arrangements. I am using this post to begin a broader series on the topic due to the frequency with which these issues arise.

Many parties in a divorce are surprised to find out that a prenuptial agreement may not be valid or that its terms may not mean what one thinks. Issues that often arise include:

These types of disputes can lead to situations where a spouse becomes entitled to assets that he or she thought belonged solely to the other spouse. Conversely, situations also arise where one thought an item would be community property when, in fact, it will not. Understanding these issues will greatly impact how you proceed in any Nevada divorce case.

The most important thing to remember is that you should consult with a lawyer before assuming that a prenuptial agreement will be upheld by a Las Vegas Family Court Judge. People, too often, simply go into the process without first finding out more about their rights. Gaining the opinion of a professional may quickly lead to your understanding that a prenuptial agreement means something other than what you thought. This, again, impacts the decision of how to go about your divorce or whether it is even financially feasible to file for divorce in Nevada.

As a Las Vegas divorce lawyer I have dealt with many cases where the parties’ assumptions about a prenuptial agreement proved to be incorrect. If you are involved in a contested marriage dissolution, and a premarital agreement is involved, then contact me today.