How Military Service Impacts The Relocation Of Las Vegas Children 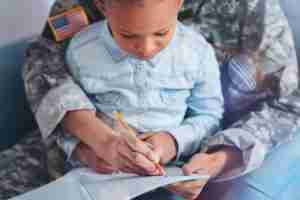 This is the next post in my series discussing how being in the military impacts child custody and family law issues in Las Vegas, Nevada. My last post discussed how an Air Force member’s deployment can affect child support. In this post I will discuss what occurs when a civilian parent wishes to move outside of the state with a child.

It is common for a civilian parent to wish to return home following a military divorce. This creates a complicated issue for those stationed in Las Vegas, Nevada as personnel simply cannot move any time they wish. Understanding how the Court will view a relocation request is crucial for service people who wish for their child to remain in our city.

The relocation of children following a divorce is complicated as both sides often have a legitimate argument. The Court will make their final decision based on what is in the children’s best interest. The person requesting the relocation will have the burden of proving that a move will benefit the children. The Court will consider if there is a financial benefit to the children, if they will be provided additional educational and healthcare opportunities, and any benefit that may be had being closer to extended family. The Judge will also wish for the relocating parent to have a well thought out plan in place, outlining how visitation will work for the children and the other parent. If the military parent is frequently deployed then it is more common for the Court to allow the civilian parent to relocate, provided the move is in good faith.

Raising children while in the military is difficult and doing it as a single parent even more so. The Courts will balance the requirements of the military with the best interests of the children. That is why the Court may allow a civilian parent to relocate with the children while the military parent is an active duty member. The service member, however, will often be able to get a larger percentage of time with the child after they have been discharged. If the civilian parent was granted permission to relocate then this request for a post-discharge modification will likely need to be filed in whichever state one’s ex has moved to. Many military parents are able to enjoy more family time once discharged from service, and the Court will often consider this a significant change in circumstance, and will allow the parent to revisit the custody agreement. At this time, it is often possible to win a more balanced custody plan.

If you are in the military and are concerned about your ex’s plans to relocate, contact our Las Vegas family law firm today.