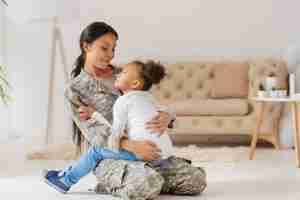 Las Vegas is the proud home of Nellis Air Force Base. A 2000 census approximated that more than half of all households on base have children living in them, and that sixty-percent of these households had married couples. Unfortunately, as is true of civilian families, not all military marriages work out. This can create some unique challenges during the family law process for air force members. Military members can prepare to address child custody and divorce issues accordingly if they understand how being in the air force base impacts these situations. My new series will address common issues that military members often encounter when they are going through a Las Vegas divorce or child custody dispute.

In domestic relations cases, there are several issues that arise and are specific to air force base members. Over the course of this series, I will be discussing the following issues:

Military members are often unaware that their service to the Air Force can have an impact on their divorce and child custody matters. It is important for members of the armed service to follow all orders of the Clark County Family Court in order to avoid facing disciplinary action from their commanding officer. The stress of being deployed and having to focus on a dangerous job while in the midst of a domestic conflict can leave many Las Vegas servicemen feeling overwhelmed by the details of their family law dispute.

I am a practicing family law attorney in Las Vegas, Nevada. I have helped numerous military families find creative and satisfying solutions to a number of common problems air force members frequently go through. If you are a member of the air force, are a military wife, or share children with a military member, and require legal services, contact our office today.