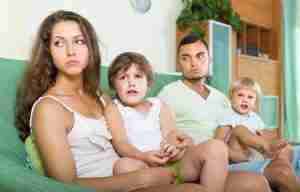 This is the next post in my series addressing why Las Vegas residents sometimes choose to accept a divorce settlement or an uncontested divorce containing unfavorable terms. My last post provided an overview of reasons why this occurs – even after one’s lawyer has advised a client of their legal rights. In this post I will explain how a guilty conscience can motivate some people and why making decisions out of guilt can be harmful in the long run.

It can cause a great deal of guilt when one wishes to leave a marriage against the wishes of the other spouse. The couple may have grown apart or perhaps one person has fallen in love with someone new. Other times the children have moved out of the home and one member of the couple has realized they don’t have anything in common with their partner anymore. Whatever one’s reason may be for asking for a divorce, it is not easy to cause their long-term partner pain – particularly if their partner has not done anything “wrong.” Unfortunately, some divorcing partners, women in particular, feel guilty over leaving the marriage and are willing to give up their legal rights in order to avoid further conflict. It is not unusual for such people to feel that, because they chose to end the marriage, they do not “deserve” the property or retirement benefits that they may be entitled to. While guilt is an understandable emotion in this situation, it is important to understand that as time passes so will the guilt. And once the dust has settled many people regret their decision to give their partner whatever they want.

As a no-fault, community property state, Nevada does not care what caused the demise of a relationship. Our state’s property division laws are relatively simple; all community property is to be divided equally. This means that each partner is entitled to walk away from the marriage with assets which are equal in value. This includes all income in the bank, assets, retirement funds, and pension plans. If one partner was a stay at home parent, or made significantly less than the other, then there is a high possibility that a court would award spousal support. If minor children are in the home then the Clark County Family Court will mandate that the noncustodial parent pay child support according to the state’s standard formula. However, if the couple chooses to negotiate a settlement that is blatantly biased towards one party, and both partners sign off on the agreement, then the Court will likely uphold the agreement even though it is lopsided. This is why it is important for Las Vegas residents to consult an attorney prior to agreeing to an uncontested divorce or making any settlement.

When you consult an attorney then they will explain to you what your rights are under the law. Obtaining objective advice that is not colored by emotion is often helpful to those who are caught up in the emotional aspects of divorce. If one is considering signing off on a divorce agreement that gives away their rights it is important to consider the attorney’s point of view. Many persons who waive spousal support, any rights to a spouse’s retirement pension, or who gives up the majority of property, may not be prepared for the reality of being financially independent. Too often, a newly divorced client realizes once that it is too late, that they are struggling to get by because they chose to give up their rights. This is a long-term mistake that will have significant financial consequences.

If you are going through a Las Vegas divorce, and are feeling guilty over your actions, do not let your emotional state of mind affect your long-term future. Consult a divorce attorney today and ensure that your rights are protected.