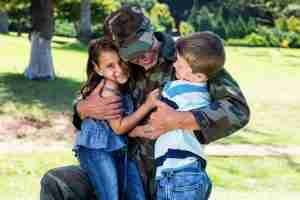 This is the next post in our series on Las Vegas child relocation cases for parents in the armed forces. In our last article we discussed the handling of relocation requests for military families with joint custody. Move-away requests can be stressful on parents who may be concerned about their visitation rights and access to their child. This post will consider the issue of deployment when a parent in the armed forces has been granted  an out of state move with the child. In each of these instances, it is important to retain an experienced attorney to represent your interests. If you need assistance, contact my office today to speak with a lawyer.

As I stated in my previous post, a court order is required for a party to relocate out of state with a child. When the moving parent also serves in the armed forces, the court order will address what will happen if that parent is deployed. A common position taken by the non-relocating parent is that the child should be returned to him or her if a deployment occurs. The court will evaluate this request using the “best interests” of the child standard. Factors such as the potential upheaval of shifting the child, the length of the potential deployment, or differences in available schools may be a part of the evaluation. Suppose, for example, the two parents live on different coasts. The court may conclude that requiring the child to move across the country only to have the child move back with the other parent returns would not in the child’s best interest. The court order may instead require a deploying parent to identify custodians to care for the child in his or her absence. The temporary guardians would be required to comply with all aspects of the existing child custody order, including the visitation schedule of the other parent.

In some cases, the non-deploying parent may seek a change in custody as a result of the other parent’s deployment. It is important to note that the deployment itself is typically not a justification for a change in custody. If the deployment plan, once implemented, causes problems for the child, a court may reconsider whether a new arrangement would be in the child’s best interest. For example, if a child brings home failing grades from school or suffers emotional distress in the parent’s absence, a court may decide a change of custody to the other parent would be better for the child. Each case will be determined based on the specific facts of the situation.

Custody issues can be complicated and emotional. For families with one or both parents serving in the Air Force or other branches of the armed forces, the additional issues of relocation and deployment can be even more stressful. It is important to contact a Las Vegas family law attorney to represent your interests. My firm is dedicated to family law and is ready to assist you. Contact us today to speak with a lawyer.