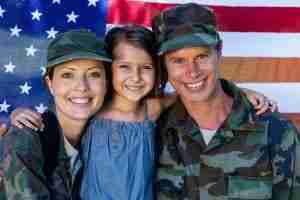 This is the next post in a series of articles discussing how Nevada’s divorce laws may impact active-duty military members in Las Vegas. My previous article explained Nevada’s residency requirements for seeking divorce within the state. For active-duty military personnel stationed at Nellis Air Force Base, Nevada’s six-week residency requirement and “no-fault” divorce option may be more attractive than that of their home state. It is important to discuss your filing options with an experienced divorce attorney to fully understand how your choice may impact your case. In this post, I will discuss how military pension benefits may be divided during a divorce under Nevada’s community property laws. If you need assistance, contact my office to schedule a consultation.

Under Nevada law, property and debts accumulated during a marriage are generally considered community property. During the marriage, both spouses have equal rights to community property. If a couple divorces, the court will attempt to split community property equitably between them in their property settlement. While there are some exceptions to this rule, such as inheritances or gifts to one spouse only, the concept generally applies even if an asset or debt is held in one spouse’s name. For example, if a couple purchases a home during their marriage, but the title is held in the husband’s name only, the house will likely be considered community property and the wife will have certain rights to the asset during a divorce. This concept applies to retirement accounts and pensions, including military pension benefits.

Under the Uniformed Services Former Spouses Protection Act, a federal law, military spouses are entitled to a portion of the service member’s military pension. Pursuant to the Act, the amount of pension benefits accrued during the marriage is considered community property and subject to equitable division between the spouses. For example, if a wife served in the military for 20 years and was married for 16 years of that time, the spouses would equally divide 16 years of accrued pension benefits. Her spouse, therefore, would be entitled to receive the equivalent of 8 years of the pension upon their divorce. Unless the parties negotiate settlement terms to the contrary, the equal division of community property pension benefits will be the default position of the Clark County Family Court. The parties will then be required to obtain a Qualified Domestic Relations Order to provide to the pension administrator, who will enforce the court’s order to pay the spouse when the pension becomes payable to the military member.

As with other property divisions, the spouses can negotiate a private settlement on terms that differ from Nevada’s default rules. Using the example above, the wife may wish to retain her entire pension and instead offer a cash buyout of her spouse’s portion. She may instead, offer to assume responsibility for a joint debt in exchange for the spouse’s release of their rights in pension. Settlement agreements can have long-term financial consequences on the finances of both parties. It is important to consult with an attorney before finalizing a settlement agreement to fully understand your rights.

If you are considering a divorce and need assistance, contact my office today to speak with a Las Vegas family lawyer. My office has significant experience handling family law cases involving military personnel, including divorces, custody disputes, and annulments.