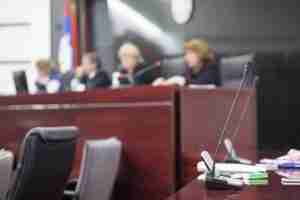 This is the next article in my series on child custody appeals by Las Vegas, Nevada parents. My last post discussed the possibility of appealing a custody decision due to factual findings. It is important for parents to understand that the appellate court does not typically dispute the factual findings of the lower court. There are instances, however, where the appellate judges may find that the lower court made a clear error in its findings. In such an instance, the matter may be remanded to the lower court or reversed outright. How the Court will rule in any given instance, however, will always depend on the specific facts of the case. In this article I will address the possibility of appealing a decision due to legal errors by the trial judge. If you or a loved one wish to challenge a Clark County Family Court ruling then contact my office today to speak with a lawyer.

There are a number of ways in which legal determinations by a trial court can be challenged. The lower court may have misinterpreted the rules of evidence and erroneously admitted, or erroneously denied the admittance of, information. The lower court may have also failed to apply the proper legal standard to the case. Each of these situations can take many shapes and forms. I will provide an example of each in turn.

Suppose a father was requesting that the Family Court change custody in his favor. Now suppose that the father, at trial, requested that the court review various documents showing that the mother had not been attending parent-teacher conferences and was otherwise ignoring the child’s educational needs. None of these documents had been provided to the mother before trial (such a disclosure is required by the rules of civil procedure). Now suppose that the Court allowed the documents admitted over the objection of the mother. The Court later rules that the father should have custody due to the mother ignoring the child’s education. Under this scenario, the mother could appeal and say that the Court failed to follow the rules of civil procedure. If the appellate court agrees then there are three possible outcomes. First, if the appellate court finds that the lower court’s decision would still be supported without the wrongfully admitted evidence, then the lower court’s ruling may be affirmed. Second, if the Court finds that, absent the disputed evidence, custody should have clearly stayed with the mother, then the Court may reverse the decision outright. Finally, depending on the facts of the case, the Court may remand the matter for a new trial. Again, all rulings will be based on the specific facts of the case.

Now suppose that a mother moved a child out of state without first gaining the father’s permission. The mother believed that she was not required to do so as there was no existing custody order, even though the father was on the birth certificate. The father files a Complaint and Motion with the Court asking that the child be returned. The lower court denies the request and holds that the mother was not required to gain permission from the father to move. At trial, the trial court also finds that the mother’s actions were not an effort to frustrate the father’s visitation as she was not required to gain permission. This forms the basis of the lower court granting out of state custody to the mother. Such a ruling would clearly violate Nevada law as Druckman v. Ruscitti requires a parent to gain permission to leave the state once paternity has been established. On appeal, the Court may reverse the matter and remand it for a new trial in which the lower court would apply the correct legal standard.

The above discussions are just two simplified examples of how a legal decision, by the trial judge, may be challenged in a child custody case. It is important for parents to understand that appeals are highly complicated and are time-sensitive. If you believe that you wish to dispute a Family Court ruling then it is important that you contact an attorney immediately. I am a Las Vegas family law appellate lawyer who handles custody appeals. If you need assistance then contact my office today to schedule an initial consultation.